Electronic Monitoring: Keep an eye on your vessel from anywhere in the world

Electronic Monitoring, as seen in the October issue of Marlin Magazine, written by Capt. Karl Anderson

In the past six or so years, several very progressive and forward-thinking companies started developing integral onboard vessel monitoring systems. These systems have been the beneficiary of a controller area network, or CANbus, technology, where sensors, actuators or micro-controllers communicate with each other without the use of a host computer. The information gathered from these processors or sensors is able to flow back and forth, where previously this kind of data flowed one way from the sensor to the host and perhaps the end-user’s display. 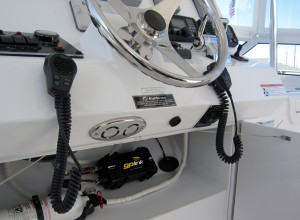 The automobile industry picked up on the CAN technology in the early 1990s and began integrating the systems into vehicle design. These systems now monitor and record everything from engine and transmission system data to when you apply the brakes or even lower your window.

Consequently, the new onboard monitoring systems are very thorough and integrate all of the various areas of your vessel, including the bilge, ventilation, engine, generator, tank data — just about anything you could possibly want. You can even tell how many times a particular pump cycles or monitor the room temperatures in every stateroom.

Several diesel and outboard engine manufacturers utilize this technology to control their engines and set up functions such as fuel-flow settings and valve timing to ultimately reduce exhaust. The next logical step for this type of real-time connection in the marine industry was to follow what General Motors started with its very successful OnStar vehicle monitoring and reporting system.

Several companies have made attempts to bring this type of talk-back system to the marine industry, but so far, none have made it to a mass market, until now. The folks at gplink recently broke that invisible barrier and introduced a new product into the recreational marine industry. The system automatically uploads a multitude of data for the remote owner or captain, allowing them to monitor the vessel via GSM or satellite. Previously only available in large-fleet or military applications, gplink is now available for anyone running a Caterpillar-powered vessel.

Offering real-time data transmission and system monitoring, gplink utilizes dual-band technology with GSM communication and the Iridium satellite system to ensure that communications are not only reliable, but affordable as well. The equipment, which consists of a small transponder unit and a wired antenna, is unobtrusive and doesn’t require a hardtop mount. According to the company, you can put the unit under the helm or even in the engine room. You’ll also need to install any optional bilge or smoke sensors. You can also hide the installation, making theft recovery not only possible, but probable.

Another great thing about this system is that you can retrofit any CAT-powered boat. It takes approximately three to four hours to install the system on a vessel with electronically controlled engines — a bit longer for older mechanical engines that also need the addition of several engine sensors to acquire the proper data. The system runs independently from the rest of the vessel but does require an uninterrupted power source to monitor the vessel 24/7. But on the plus side, should the batteries start to run low, gplink notifies the owner before the ship goes dark.

Once you install the equipment, you’re assigned your own website to monitor your vessel. After you log in to your site from www.gplink.com and set up your account, you can customize all of your alert notifications and the contact list of who’s to be alerted in case of an emergency. Once you’ve completed filling in your vessel data, you can literally watch your boat’s position and engine performance from anywhere in the world. But you don’t even have to bother watching all of this info yourself if you don’t want to — all of the information on your vessel is also being monitored by the concierge.

Dan Webb, gplink’s marine business manager, says, “The concierge service was developed jointly with Caterpillar to specifically offer Caterpillar owners another level of service through the exclusivity of the gplink system. The concierge-service control room uses a large, on-screen map of the world to track the vessels enrolled in the system in real time. The concierge knows immediately when any alarm goes off, and when one does, he or she notifies the boat owner and technicians. Basically, with gplink, you get the services of a 24-hour technician who can help you troubleshoot and get you back in the game.

Probably the two most valuable things gplink offers are the ability to monitor your vessel’s position continuously and the addition of a geo-fence that lets you know whenever your boat starts to move. The other key is the monitoring of engine data and the immediate knowledge of any engine alarm as it happens. Having the ability to know this information as it unfolds and begin the process of troubleshooting and repairing the problem ultimately reduces downtime and service-technician dockside-visit expenses.

With an MSRP of $3,600 for a turnkey-installed system, gplink provides a relatively inexpensive security and troubleshooting solution for your sport-fisher. Sometimes just calling in a mechanic for some dockside troubleshooting can run nearly half that cost. The yearly monitoring fees for the concierge call center are approximately $1,500 per year, and with the possibility of an insurance rebate, this cost could potentially be cut by more than half.

The folks at gplink are currently working with OEM manufacturers using Caterpillar engines to install the system as new-boat equipment, but the retrofit for in-service boats is not really a hassle — you shouldn’t have to interrupt the boat-use schedule for more than a day or so to have the system installed.

The technology behind gplink is already well proven with vehicle and vessel fleet tracking. Even so, this is the beginning of these types of systems for the recreational marine industry, and it appears that the folks at gplink have done their homework, bringing a practical, user-friendly, robust security and monitoring tool to the tips of your fingers — no matter where you, or your boat, may be.